The relationship between Napoleon Bonaparte and farmer Kees Boon from Slochteren, Groningen probably won’t ring a bell with anyone. Still, the French colonel had significant impact on Boons’ financial situation. On May 29th, 1959 the largest bubble of natural gas in Dutch history was discovered on the land of the Groningen farmer. 2700 cubic meters of natural gas could have provided Kees a life without financial worries. However, thanks to the ‘Mijnwet’ implemented by Napoleon things turned out differently for Kees. Any excavation deeper than two meters belonged to the state Napoleon decided in 1810. Farmer Kees was left with only 1000 guilders. Nevertheless, this historic day marks the advance of an impressive increase in Dutch prosperity. Like a house provides safety and comfort, the gas bubble formed the foundation on which the Dutch welfare state could thrive.

When looking back at the 20th century of the Netherlands, the living standard and freedom that people generated was largely owed to natural gas. Where – in the 1950s – it was still customary for people to have major clean ups in spring to remove the soot deposits that had arisen from a winter-long firing, fifteen years later this almost seemed unthinkable. The house that was associated for years with safety and shelter, suddenly brought comfort to people’s daily lives. The transition towards gas symbolized the beginning of a more ‘easy lifestyle’ for everyone. Central heating was introduced, radiators provided an even distribution of heat and boilers created warm water. Multiple rooms could be heated which made everyday life much more pleasant. All intensive labor required for heating got suddenly replaced by just a single snap. 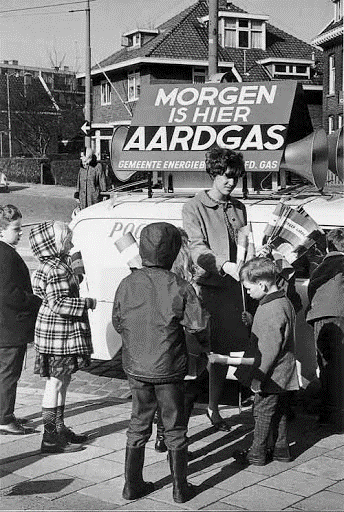 Founding of gas in Slochteren, Groningen

How did the Netherlands shift to this wealthy lifestyle? This all dates back to the first drilling for natural gas on the 22nd of July 1959, in Slochteren. After which it would soon become the beginning of a major energy transition in the Netherlands. To capitalize on this discovery, Royal Dutch Shell and Esso formed a joint venture called the Nederlandse Aardolie Maatschappij (NAM), and the Dutch State owned 50 percent of shares in NAM. Mass drilling for gas began in 1963. At the same time, the Gasunie – which was completely owned by the Dutch State - was established as an organization to sell natural gas. In just three years, 1200 kilometres of gas network was put in place, and in ten years the Gasunie had created a gas network connecting 75 percent of the Dutch population to natural gas.

Gas infrastructures were built at an unprecedented pace, accompanied by excited slogans such as “Natural gas, heating in your home”. Greenhouses, industries and businesses were also connected to natural gas. Not only was the Netherlands providing natural gas for the country, but it was also exporting to countries such as Germany, Belgium and France, and was contracted to do so until 2030. However, the massive influx of wealthy and prosperity came at a cost, and it is no wonder that the Dutch reliance and addiction to natural gas gave inspiration to the term ‘Dutch disease’.

The downside of welfare

The Dutch welfare bubble did not just provide prosperity for households, but also led to a growth of the influence of the state. But just like a roof symbolizes the peak of a house, also the drilling for natural gas started to hit the celling. Consecutive years of intense drilling stimulated by the government to facilitate people with an easier lifestyle and comfortable living started to show cracks. Earthquakes or subsidence as a result of all the drillings became increasingly common. Inhabitants of Groningen gradually saw the downside of the natural gas welfare. As disagreement grew, people started to question the value attached to a house with radiator and central heating. By the end of the 20th century, the generous ‘gas welfare state’ had reached its capacity. In Groningen, people bore risk of a broken house all the time as the drilling nearby their place have never stopped. People feel themselves living on shaking ground while their complaints have been ignored by the state for years. The comfortable house that was once created to facilitate all, became one at the costs of others. 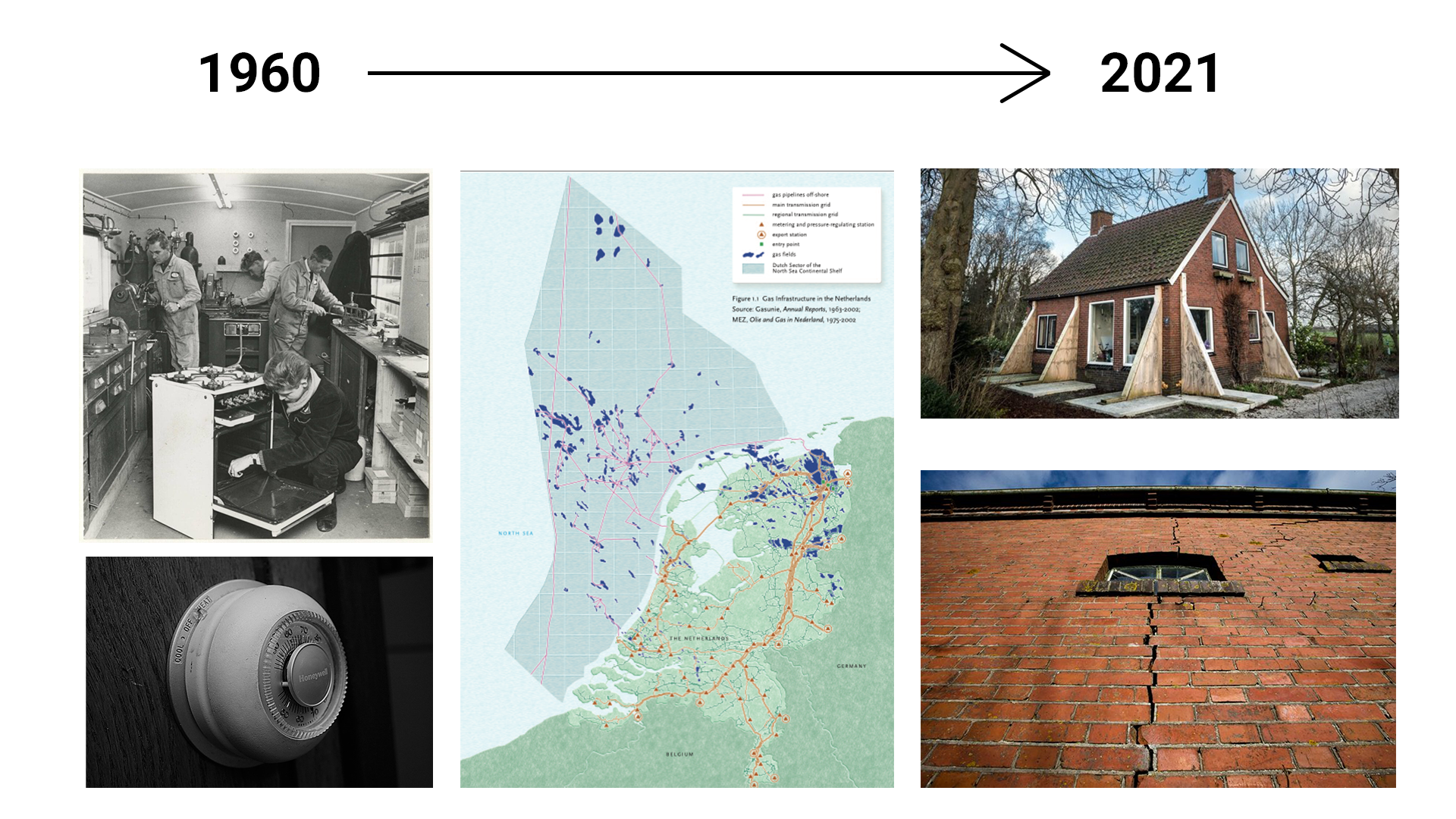 The story of Farmer Kees Boon is perhaps typical for this iconic moment in Dutch history. The finding of natural gas in 1959 have significantly changed the socio-economic landscape in the Netherlands. Where first everyone reaped the benefits of this discovery, it became mainly the government who in the long run benefited. The biggest wish of the inhabitants of Groningen is therefore that the gas tap will be shut down as soon as possible. Disconnect the houses from natural gas and apply renewable energy for a future prove living, environment will be key. 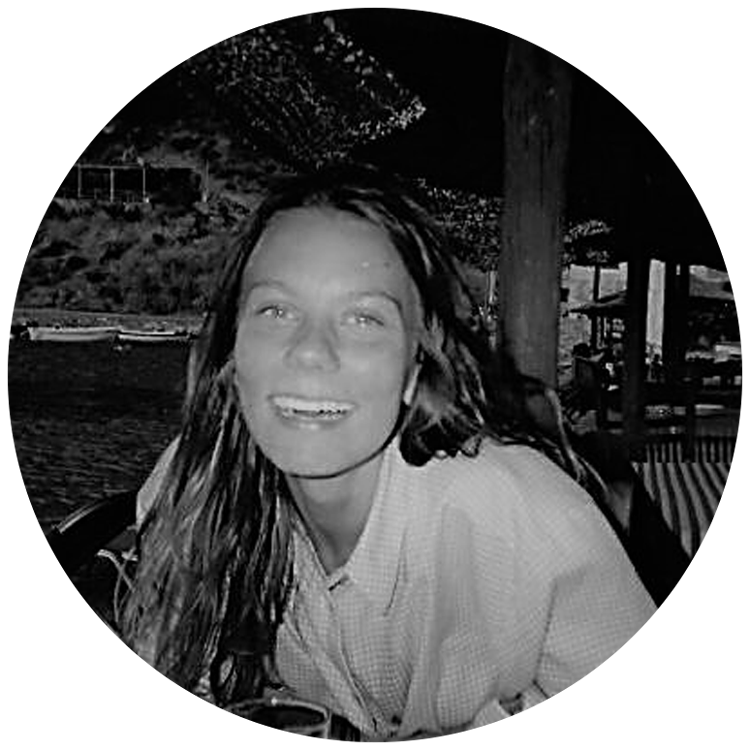 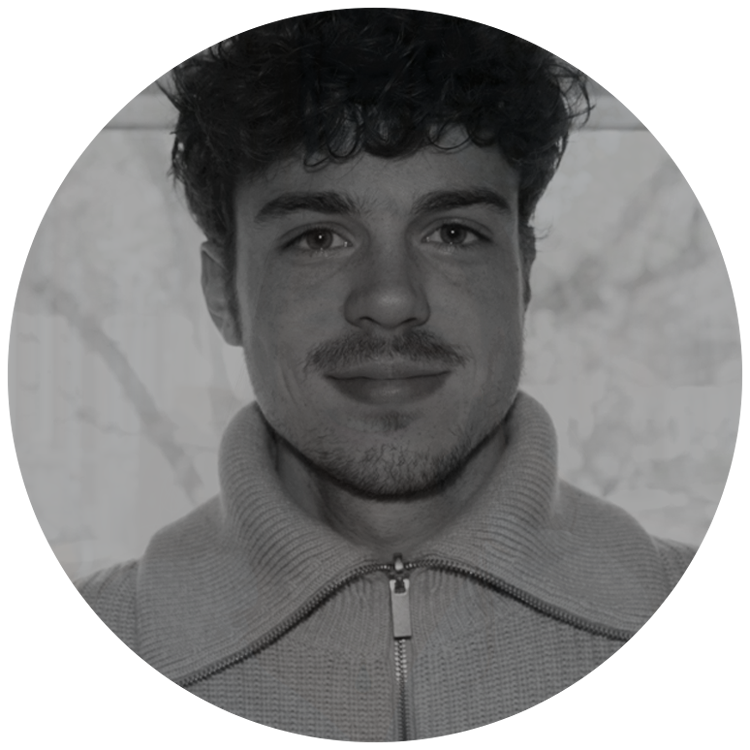 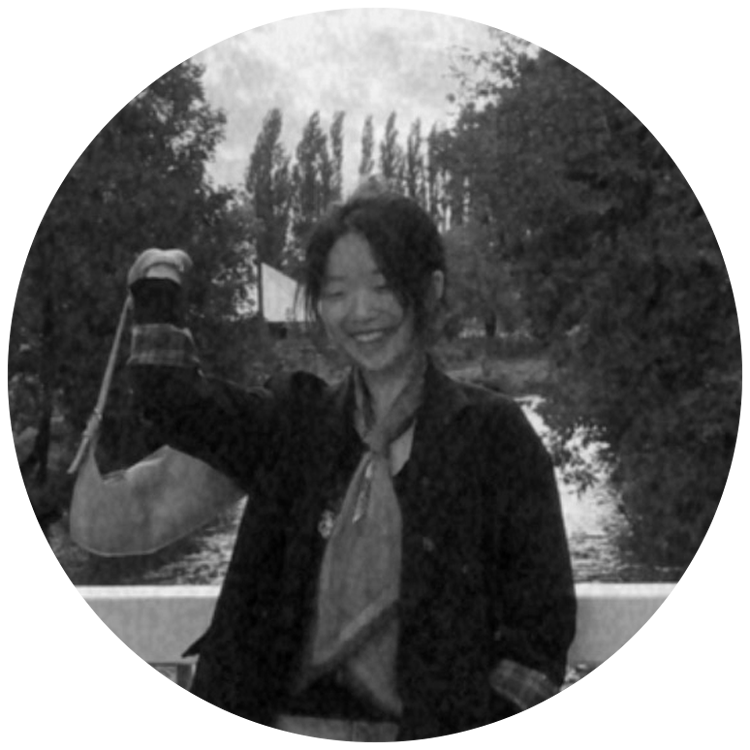 Prev
1881: The first landline in the Netherlands
Next
2006: Room for the river